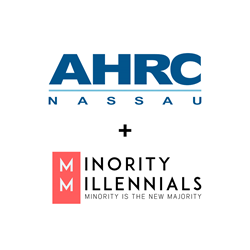 AHRC’s partnership with Minority Millennials, Inc., is a way to bridge the future leadership gap, and do so while offering meaningful career opportunities… Stanfort Perry, Executive Director, AHRC Nassau.

AHRC Nassau, one of the largest disability agencies and employers in New York State, is joining Minority Millennials, Inc., a nonprofit focused on local BIPOC workforce development, to increase awareness of career opportunities and growth in the field of disability. The partners seek to respond to Nassau County’s increasingly diverse population, where approximately one out of every three Long Islanders is a person of color.

“AHRC’s partnership with Minority Millennials, Inc., is a way to bridge the future leadership gap, and do so while offering meaningful career opportunities,” said Stanfort Perry, Executive Director, AHRC Nassau. “I started my career 30 years in the disability field as an entry-level direct support professional. I am proud to now lead operations impacting more than 2,000 people with developmental disabilities, their families and the community. This partnership is a way to welcome the next generation of leaders.”

Together, AHRC Nassau and Minority Millennials, Inc., will seek to develop BIPOC staff members at all levels by offering authentic avenues of engagement for Long Island’s population of color.

“We appreciate the opportunity to partner with a fellow nonprofit who shares the same vision of a more economically, culturally and socially sustainable future,” said Dan Lloyd, Founder & President, Minority Millennials, Inc. “AHRC walks the walk. It is an agency culture dedicated to the inclusion and advancement of all people.”

AHRC Nassau, a chapter of The Arc New York, is one of the largest agencies on Long Island supporting people with intellectual and developmental disabilities (I/DD). Based in Nassau County, the nonprofit empowers people to lead fulfilling lives, together with family, friends and community. AHRC’s programs include a wide array of support for people with disabilities and their families, including vocational and employment services, adult day habilitation and community-based services, guardianship, family support services and respite/ recreation opportunities, as well as residential services. AHRC Nassau was recently re-accredited by New York State’s Office for People With Developmental Disabilities as a COMPASS agency. This distinction of excellence is held by only four agencies in New York State. The agency is also part of an elite group of international agencies accredited by CQL | The Council on Quality and Leadership for Person-Centered Excellence Accreditation With Distinction.

Minority Millennials, Inc. is a grassroots not-for-profit organization dedicated to helping young people of color access jobs, build wealth, and become more civically engaged. They accomplish this mission by developing and strengthening the region’s diverse talent with the resources they need to understand how to influence meaningful change and exposing them to various industries and sectors.