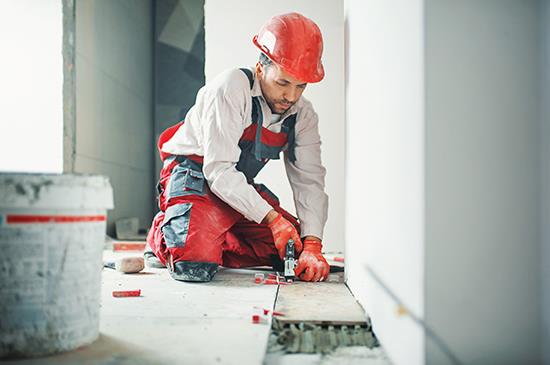 By Darius Helm and Meg Scarbrough

Last year, when residential remodeling and homebuilding markets abruptly surged, it was a stark reminder to flooring retailers and residential contractors that the dearth of installers is a problem that will not solve itself and cannot be circumvented. Many retailers have taken matters into their own hands and have developed strategies to recruit and train their own installers. And there are signs that industry associations are facing the issue head on and taking concrete steps to develop solutions.

A couple of years ago, the World Floor Covering Associa-tion (WFCA) worked with other trade associations like the National Wood Flooring Association and the Tile Council of North America to study the installer problem. One of the findings was that the industry, with maybe 150,000 installers on hand, would need 8,000 to 10,000 new installers per year for the next ten years and at least 60,000 in the next five years.

This shortage of installers didn’t occur overnight. And it wasn’t all due to the 2009 recession either. In some ways, the recession only exacerbated the installer issue. Like many trades, recruitment is often a family matter, with parents passing their expertise to their children and bringing them into the trade. That structure played a big role in replenishing the installer pool, and it was already fracturing before the recession came along and turned a problem into a crisis.

Some point to a cultural emphasis on colleges over trade schools, others point to wage issues-particularly in the floor-ing installation trades-and still others cite the decline in union labor and its educational infrastructure. Whatever the case, when the recession came along, thousands of installers ran short on work. Many of the older, more experienced installers retired. Some moved to other professions. Because there was no substantial mechanism to attract and recruit new workers, and with a major chunk of the trade’s knowledge base having moved on, the industry floundered.

The slow pace of the recovery in some ways masked the depth of the issue, because volumes were so much lower than in the years leading up to the recession. And for some time, immigrant labor, particularly craftsmen from Latin America, helped fill in some of the installer gaps. But over the last few years, that source of labor has also largely dried up as a result of immigration policies, according to retailers.

Last year threw the issue into sharp relief when, starting in late spring, homeowner renovation and homebuilding started to surge. And all sorts of bottlenecks developed up and down the pipeline-some manufacturers had problems delivering product, there were troubles with transportation, and there weren’t enough installers.

PATHS FORWARD
As noted above, floorcovering specialty retailers have had to come up with their own solutions in order to keep their heads above water. While the bulk of retailers report that installation is still the biggest problem they face, some are managing to navigate their way through the challenges.

Mike Lee always knew he wanted to go into the trades. He originally tried to follow in the family’s footsteps and go into pipefitting, but instead, he got into roofing through a family connection before getting into flooring installation in 1984. He recalls, “Back then, there were a lot of guys going into the trades; not everyone went to college.” But he says kids these days are being pushed more toward the college route, including his own children.

Today, Lee has been with St. Louis-based Ambassador Floor for 25 years, working his way up to his current role of vice president of operations.

Covid has exacerbated the problem in the flooring industry, but in a constructive way, perhaps. With an increased demand for installation as people shelter in place and update their homes or build new ones, project backlogs are growing.

“The challenge we have now is that since Covid, more folks are working from home and our retail flooring business has exploded,” says Jeff Macco, CEO of Macco’s Floor Covering Center, based in Green Bay, Wisconsin. “So the challenge now is that all of a sudden we have a labor shortage that’s worse than before because Covid has driven people to spend more hours at home, and subsequently, they have wanted to update their homes.”

Lee says one specific pain point is in ceramic tile. “We have an influx of ceramic in St. Louis; there’s a lot of homebuilding going on,” he says, adding that as people either build new homes or update existing ones, there’s been an increase in luxury items being installed in homes, like ceramic tile showers, backsplashes, etc. “The really good ceramic tile guys are getting harder to find.”

Scott Carothers, executive director of the Ceramic Tile Education Foundation, agrees there are not enough tile in-stallers, specifically qualified ones that follow best practices. “We know we have a problem,” he says, but he’s quick to point out that many people think anyone can install tile. “It’s true; anyone can. But the question is: are they qualified, and will it stand the test of time?”

He describes tilers in three categories, “The first one is the one we wished would go do something else because they are doing installations that are not to industry standards or best practices. ‘Oh yeah, I do tile’ is code for ‘I really do something else, but I can throw that in for you if you need it.’ The next category, which is a small one, is the category of qualified tile installers that know how to do it correctly, should get paid accordingly, and produce a long-lasting in-stallation. The only reason the homeowner is going to call that installer back is when they want to do a second, third and fourth job. The last category is even smaller, and that’s the artists. There are a small number out there. Many times those artistic folks wouldn’t make it in the mainstream field because they are meticulous.”

Aside from the lack of students entering the trades, retail-ers say tightened immigration regulations have also limited the number of willing and able laborers.

Macco says close to half of his crew members are Spanish-speaking individuals. While it is less of a problem in Florida where he has a store, he has seen challenges in Wisconsin. He says the lack of people entering the trades means companies routinely seek other sources for labor.

“Ultimately, what we need to do is find folks that want to fill the job,” Macco says. “If they are an immigrant, we will take them. If they can do the job, we want them.” He points to one longtime employee as an example, saying the man has worked for Macco’s for going on 25 years. “He came to the U.S. and became a citizen and has brought in lots of other individuals. I probably have six or seven crews that are Spanish-speaking citizens who all came because they all knew someone. And they are incredibly hardworking individuals.”

He says he would like to see some loosening on immigration regulations in the future “as long as a person comes in and says, ‘I’ve got a job lined up for me.’ That would give us the ability to go recruit in Mexico, wherever. If we can’t find enough people to do the job here, we will find them somewhere.”

EDUCATION, VALUE AND PRIDE
There is a meme circulating social media that sums up the labor…

Read More:Installation Labor Update: From retailers to trade associations, efforts to replenish the