by admin
in WFM Software

Your employees might be struggling in the aftermath of the Supreme Court’s decision earlier this summer. For many, it has little to do with unwanted pregnancy and abortion access. Among LGBTQ+ employees, there is sadness, fear, and rage. Some will struggle to regulate extreme emotional discomfort, and others feel jaded. While the LGBTQ+ community isn’t a monolith, many of us are grappling with not only what rights we don’t have, but what could once again be taken away.

The odds are likely that, with between 133 million and 157 million full-time workers in the U.S., a significant number of people in your organization either identify as LGBTQ or have a family member who does. What affects them also affects your organization. It has an impact on their interactions, how they show up, ability ot be open with team members, performance, motivation, ultimately can impact the readiness of your workforce) .

However, increased visibility in the workplace and beyond doesn’t come without backlash. Across the country, proposed (and some passed) anti-transgender legislation attacks transgender youth as well as their healthcare providers and families. Plus, overall anti-LGBTQ legislation — like Florida’s Don’t Say Gay bill — bans educators from discussing gender and sexuality in the classroom.

The anti-LGBTQ sentiment that fuels this legislative backlash is ever present in media as well as everyday life and looms as a larger threat than just isolated pieces of legislation.

Why Roe is relevant beyond pregnancy

Growing anti-abortion rhetoric came to its climax earlier this summer. On June 24, 2022, the Supreme Court overturned Roe v. Wade, a landmark court case establishing the right to abortion at a federal level. Though a majority of states have protections for those seeking and providing abortions, the ruling opened the door for states to eliminate legal abortion care. Many have, including South Dakota, Texas, Kentucky, Missouri, Arkansas, Oklahoma, Mississippi, Louisiana, and Alabama, according to Planned Parenthood. Millions in the US now navigate a new reality where they fear being criminalized for terminating a pregnancy or having a miscarriage.

While the impact on those who can get pregnant is clear, it also creates fear and uncertainty for marginalized communities who now have to question the stability of their own rights fought for and established in settled law.

The overturn of Roe v. Wade could spiral into unraveling other historic precedents of landmark civil rights cases, Obergefell v. Hodges and Loving v. Virginia. Obergefell v. Hodges established same-sex marriage as a guaranteed fundamental right while Loving v. Virginia lifted bans against interracial marriage. If either or both precedents were to be overturned, previously established civil rights would be up to individual states to decide. Poynter reports gay marriage would become illegal again in 25 to 32 states if Obergefell were to be overturned. Additionally, when Loving’s precedent was established in 1967, 15 states had their bans against interracial marriage lifted.

Over the past decade, US society has enacted tremendous social change. For instance, following the Obergefell v. Hodges ruling in 2015, corporate Pride celebrations have been normalized and likewise, organizations have encouraged queer and trans to show up as their full selves at work. However, with growing anti-LGBTQ sentiment on top of the recent Roe v. Wade reversal, many who finally felt comfortable sharing their authentic selves at work, coming out public as queer and/or trans, once again fear a reprisal of the past. 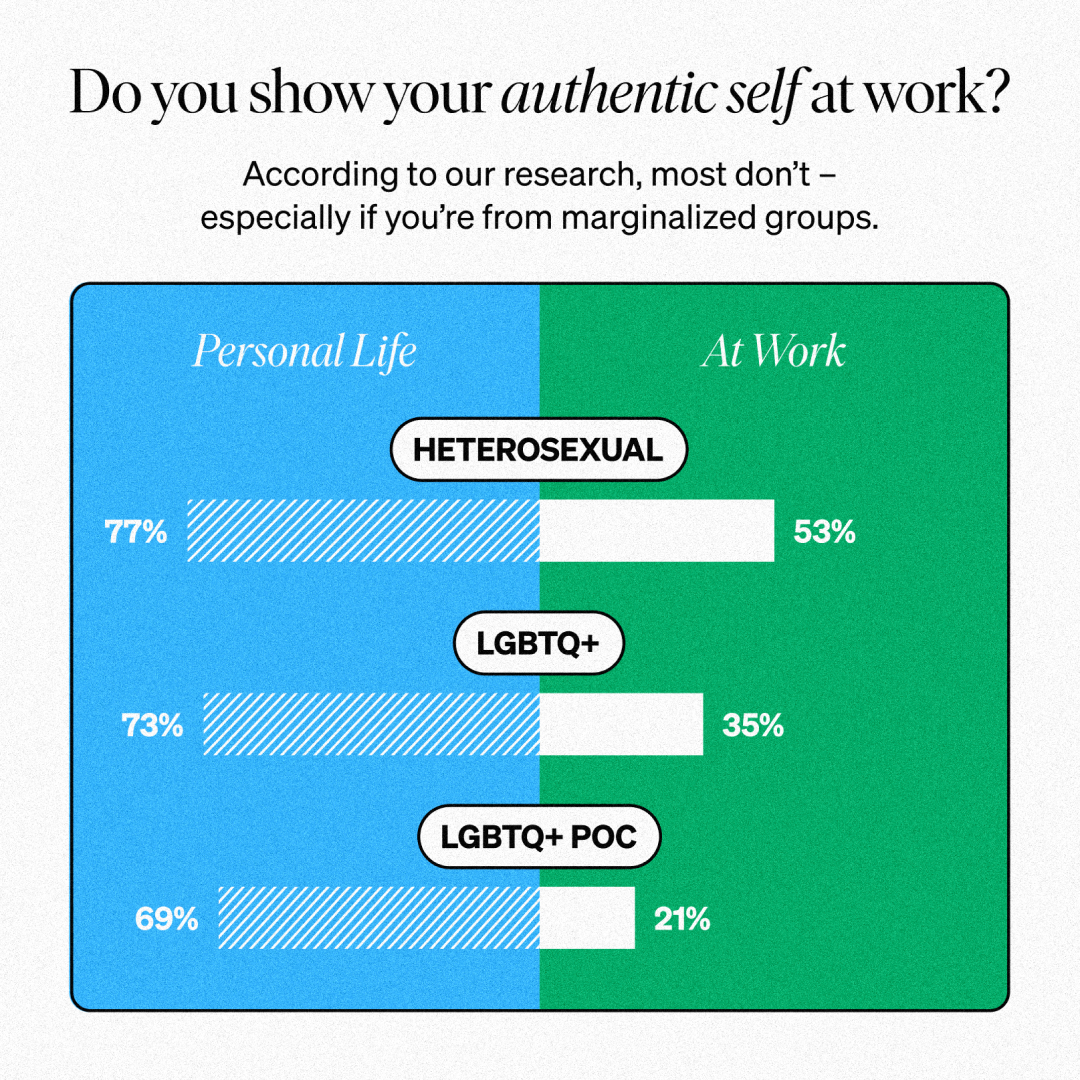 The impact of Roe v. Wade at work

No matter how much we try to ignore it, the political climate stays with us at work. Current events impact our ability to show up for work, especially if you’re of a marginalized identity. During the George Floyd uprising of summer 2020, many people of color witnessed their white colleagues finally acknowledge how police brutality, community policing, and other racist elements of our culture impact a person of color’s ability to show up for work.

The emotional toll of just hearing day-to-day news about the latest anti-LGBTQ legislation impacts queer and transgender people. While anti-LGBTQ bills haven’t been introduced in every state, the growing anti-LGBTQ political discourse reminds queer and trans people that the possibility of anti-LGBTQ legislation is right around the corner. It reminds them that the are other and their rights are not secure. Their ability to wed their partner, build a family, have legal protections for their assets, invest in their career, and ultimately plan for the future could be in jeopardy. Although it is everyone’s reality, for some groups the past is still recent enough to make this development particularly  distressing.

Seeing how supported anti-LGBTQ legislation is among everyday people also creates concern for queer and trans people (as well as their allies) at work. They are left wondering who around them, including colleagues and managers, agree with the ideas behind such legislation. Even silence around opposing such legislation and news may be enough for someone to mistrust those around them and make them feel like they’re unwelcome. They feel less belonging. This growing fear impacts someone’s ability to fully show up authentically at work and be invested in.

How to help LGBTQ colleagues in the aftermath of Roe v. Wade

With all this said, how can colleagues, managers, and organizations overall show up for LGBTQ people and other marginalized groups impacted by the ongoing political climate? There are several ways to not just be an ally, but to advocate and take action.

Lend a hand — or simply, an ear. Emotions can change as quickly as the headlines. On top of what colleagues of marginalized identities are going through in their daily lives, they might also be enduring collective trauma alongside others of similar marginalized identities. While it can be tempting to offer prescriptive “it gets better” anecdotes, many of us need tangible support. It helps to ask someone what kind of support they are specifically looking for, or if they’re even looking for support at all. Sometimes, we just need someone who is simply willing to listen and hold space for how we feel. Sometimes simple acknowledgement of accumulating trauma helps.

If a nonbinary person is regularly misgendered, for instance, it’s likely not the first time the person has dealt with this same conflict. While you might think it’s helpful to correct someone on a person’s correct pronouns, it might not be what the nonbinary person wants. Well-meaning attempts to be gender-inclusive may draw unwanted attention or be less important than other points of equity. Rather than assume, if the individual is open to a conversation, check in with how they’d like you to respond in the future when they are misgendered.

Make an effort to pursue workplace relationships. Unless you’re working for a small company with only a handful of employees, it’s common for colleagues to lack one-on-one interaction, especially if they’re not on the same team or within the same department. Make an effort to get to know people individually, as colleagues rather than representatives of a group. For instance, if you work remotely for an organization, invite a colleague you don’t know well to a brief introductory 1:1 call. Focus on getting to know them better and understanding their role within the organization rather than on their unique challenges. Forming relationships proactively will help strengthen connection later on if conflict arises.

Offer generous time off for all types of employees. It’s becoming more commonplace to offer mental health days for staff. However, mental health days are the minimum. Many organizations are implementing unlimited paid time off (PTO) to encompass not just mental health days, but vacation time, sick leave, paternity leave, etc. Unlimited PTO is also a win for employees with disabilities who cannot foresee how much time they’ll need off in advance.

Likewise, trans and nonbinary people seeking gender affirming hormone therapy and surgeries routinely battle insurance companies on what care is “medically necessary.” Your organization has the power to affirm LGBTQ healthcare as medically necessary by choosing to offer the most competitive benefits in the market. Additionally, this is an opportunity to reassess mental healthcare benefits to ensure therapeutic and psychiatric services are accessible to all employees.

Invest in equitable company culture. While one-off gender equity training sessions can be effective in the short term, they can fall short for addressing intersecting identities in the long term.

In order to address overlapping social inequities, organizations can start by building awareness, internally  and starting with leaders and managers, around unconscious biases and systemic inequality. The organization shows that this is a priority, in part, by investing in training staff on how to recognize and effectively address interpersonal issues, resolve conflict, and bring attention to systemic bias.

To be effective, organizations can think about supporting marginalized employees first, but equally investing in their managers to be more effectively supportive and foster more inclusive environments. Investing time, effort, and resources into providing ongoing support to marginalized employees (and their managers) can serve as an important initiative for employee retention, as well.

Leaders and manager can also become more attuned to the ways intersectionality affects their team members. For instance, within the LGBTQ community, people of color are often the most vulnerable economically. According to a recent report by the National LGBTQ Task Force, queer and trans people of color (QTPOC) have higher rates of unemployment, and are at a higher risk of poverty, compared to white LGBTQ people and non-LGBTQ people of color. While many queer and trans people worry about the implications of their gender and/or sexuality is perceived at work, QTPOC also worry about this on top of their race.

The polarized cultural and political climate isn’t going anywhere. Historically marginalized people (including queer and trans people) in the workplace aren’t going away either.

The tips above are just a few ways to support those around you impacted by news surrounding anti-LGBTQ legislation and the reversal of Roe v. Wade. There’s plenty of work to be done to foster a truly equitable organization, not just for queer and trans people, but everyone. However, even small steps to acknowledge differences and model inclusive behavior can go a long way.

What are parasite employees & how to deal with them?

5 tips for efficient resource planning in your organization